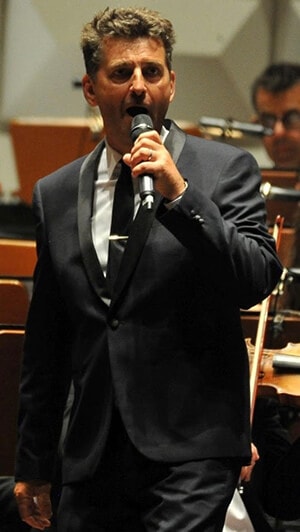 Graham Bickley is a seasoned West End veteran and a consummate concert soloist.

He has appeared in concert performances of Leonard Bernstein’s Wonderful Town playing the role of The Wreck with The Rotterdam Philharmonic and Guys and Dolls, playing Nathan Detroit with The Vienna Konzerthaus, both conducted by Wayne Marshall.  Graham has also appeared in concert arena productions of Jesus Christ Superstar and Evita, as Pilate and Magaldi and Ragtime, as Tateh.

Graham regularly appears with the BBC Concert Orchestra.  His concerts with them include Guys and Dolls, playing Nathan Detroit, On The Town, playing Chip, and a new musical version of Peter Pan by Stiles and Drewe, all at The Royal Festival Hall and recorded for broadcast for BBC Radio.  Other live concert performances for BBC Radio include Bitter Sweet, Radio Rhapsody, and Big Band Special with the BBC Big Band, and many appearances as guest vocalist on BBC Radio 2’s Friday Night is Music Night.

In 2000, Graham made his début at the BBC Promenade Concerts at The Royal Albert Hall, performing in Kurt Weill’s Street Scenes; a birthday tribute to Stephen Sondheim and then again in 2016, both with the BBC Concert Orchestra.

Other concert engagements have included; Christmas concerts and Rodgers and Hammerstein Galas for Raymond Gubbay, guest artist for a gala concert in Leeds with Lesley Garrett and the Opera North Orchestra, televised by BBC Wales, and with orchestrator Martin Koch, a concert to celebrate the work of Nelson Riddle, with The BBC Concert Orchestra and transmitted live on BBC Radio 2.

Other concert engagements included Good Thing Going, A Swell Party and Sing For Your Supper, all at Cadogan Hall, and all celebrations of the music of Stephen Sondheim, Cole Porter and Rodgers and Hart respectively with Maria Friedman and Daniel Evans, and a special guest for Barbara Cook’s 80th Birthday Concert at The London Coliseum; Barbara Cook and Friends.

His more recent concert engagements included a gala concert at The Theatre Royal Drury Lane in celebration of orchestrator William Brohn conducted by fellow Tony Award winning orchestrator Martin Koch,  and Bernstein on Broadway with the Royal Philharmonic Orchestra at Cadogan Hall and again with the Birmingham Symphony, at Symphony Hall, both conducted by Carl Davis,

More Bernstein on Broadway concerts in the UK conducted by David Charles Abell.

A decade of annual Best of Broadway concerts at The Royal Albert Hall, conducted by David Firman.

In theatre, Graham has performed in the West End for more than twenty-five years in productions including They’re Playing Our Song, Pirates of Penzance, and as principal lead in Jukebox, Which Witch, Maddie, The Pajama Game, (Dora Award ‘Best Actor’ nomination, Toronto), Les Misérables, Metropolis, Miss Saigon, Sunset Boulevard (playing opposite Petula Clark), and Ragtime, (Two nominations: the Laurence Olivier and the Whatsonstage Award for ‘Best Actor in a Musical’).

Graham toured the UK with Cole Porter’s High Society playing the role of CK Dexter Haven, culminating in a season at the Shaftesbury Theatre in London.

Regional productions include Sleuth, No Trams to Lime Street, (‘Best Actor’ nomination, Manchester), the UK première of I Love You, You’re Perfect, Now Change and the world premiere of Black Goes with Everything.

Eric’s at the Liverpool Everyman, directed by Jamie Lloyd, Great Expectations at Clwyd Theatr Cymru, Mold, Liverpool Playhouse, directed by Tim Baker and the European premiere of Light in the Piazza at Leicester Curve directed by Paul Kerryson.

The Secret Garden, directed by Anna Linstrum at the Festival Theatre, Edinburgh before transferring to the Royal Alexandra Theatre, Toronto.

A UK tour of Steppin’ Out with Anton du Beke and Erin Boag produced by Raymond Gubbay.

Benjamin Stone in Stephen Sondheim’s Follies for Opera De Toulon, House of Mirrors and Hearts at The Arcola Theatre, London.

Most recently, Graham completed a UK tour of Jackie The Musical.

Jacques Brel is Alive and Well and Living in Paris at The National Theatre and It’s Better With a Band at The Donmar.

In 2014, Graham appeared in Maltby & Shire’s Closer Than Ever at Jermyn Street Theatre, directed by Richard Maltby Jnr and nominated for an ‘Offie’ (Off West End Theatre Awards) for Best Musical Production.

Alex in The Irrationality at the National Theatre Studio directed by Blanche McIntyre, and Father in Love Story directed by Rachel Kavanaugh.

Other work included a New York workshop of a new musical, Little Dancer, written by Stephen Flaherty and Lynn Ahrens based on the artist Degas, directed by Susan Stroman.

“... is a powerful force on stage”
Mira Friedlander, Variety