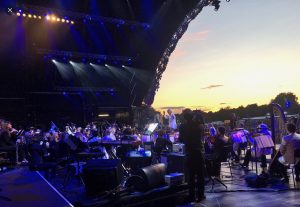 Once again, Richard Balcombe conducted the mighty BBC Concert Orchestra with an eclectic array of singers and groups at the Proms In The Park jamboree in Hyde Park. The weather finally improved and the evening sky provided the perfect autumnal backdrop to what is one of the largest and most technically complicated concerts in the year. With rehearsals starting early and culminating with a broadcast ‘tie in’ from the Last Night of the Proms at The Royal Albert Hall, it is an exhausting if exhilarating day. No rest for Richard however – today he undertakes a ten hour round trip to Portmeirion to conduct The Royal Liverpool Philharmonic Orchestra and their tribute to The Beatles seminal album, released 50 years ago this year, Sgt Pepper’s Lonely Hearts Club Band. GB