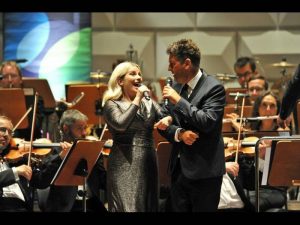 The heat was oppressive, but two concerts with our great friends, The BBC Concert Orchestra, in Austria and Germany were performed with great aplomb fuelled by gallons of drinking water (at least before the concert). This was a new programme with a new (to GRB) if extremely established leading lady in Louise Dearman. The programme was titled differently for each concert due to the requirements of the two festival organisers. Originally called ‘A Couple of Swells – Sinatra & Garlands Movie Magic’, it turns out that ‘Swells’ is nigh impossible to translate in German therefore a substitute title was employed, ‘Somewhere Over The Rainbow’. The first concert was at Kurhaus, part of the Rheingau Festival in Wiesbarden. A delightful concert hall, but sadly not air conditioned, however, the concert still proved an overwhelming success and we then travelled onto the Grafenegg Festival near Vienna, and performed our final concert in Wolkenturm, a unique outdoor concert platform set amongst a stunning landscape. On a personal note, our grateful thanks to Louise Dearman who was delightful and captivating to work with, and GRB certainly hope to repeat this concert in the near future. GB